Earth Day and Welcome back Autumn!!

From the Myth Master's Team's Desk.....
First off: WELCOME BACK AUTUMN!! :D As you might know, Autumn was a HUGE help to my blog. Sadly though, I deleted her like a month ago.... :( Autumn, is there anyway we could meet again? If so, leave a comment on this post... Anyways, WELCOME BACK TO THE BLOGSPHERE!! WE MISSED YOU!!
Second: Today is EARTH DAY!! :D Sadly, it rained, but don't worry, while I was soaking wet, in the rain, I hugged a tree.
I also downloaded around 6 apps for my I-pod Touch about going green. I also wore my special Earth Day shirt. (It says, Good Monkey, Bad Monkey, SAVE ENERGY!)
While MOST of us our worried about pollution, (or in Jessica's case, trees) I worry about another thing. Light Pollution. I already wrote about it on this literary website, but I'll paste it on here so you can read it.
"I'm writing this article today on a very important, but very ignored topic. Light Pollution.

I went to Chicago for the night one weekend I look out my window around midnight and gasp at the sight. The sky is a blackish brownish, not the usual dark royal navy I'm used to. The moon completly disapeared and the stars were gone.

When I got back to my suburbs close to St. Louis I glance up at the sky, hoping to at least see the moon, that I had once loved so dearly. But it like the rest of things dissrupted from pollution, had disapeared too.

Finally on New Years Eve I look up and see my trusty moon shining bright, with a couple of dimly lit constallations.

I speak out about light pollution, because I remember star gazing at that same home, with everything shining bright, less than a few years ago.

Light pollution doesn't just harm us , but little baby sea turtles too. When the sea turtles hatch they rely on the moon's light to guide them to sea. With no moon light, thanks to light pollution, means that turtle's lives will be lost.

The sky doesn't need to be lit. It has it's own light, the moon, stars, glaxies, nebulas, and planets to name a few.

Unlike other pollutions, light pollution can be easily stopped. Just turn off lights when you're not in a room, or turn off flood lights in the summer, when you have tiki torches lit up.

By doing these small steps, we can stop light pollution, and let the future generation see the wonders of space."
Like it?? Well I have to go, but here's a small earth day token!! 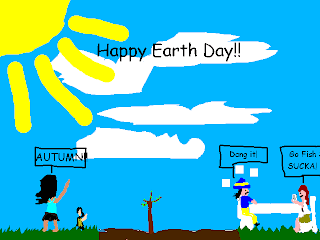 It's me in the blue halterback, Autumn in the backgroud, a newly planted tree, Van in the white one, and Ronan looks like a clown. Whoopsies.
Anyways, have fun hugging tree's in the rain!!
-Amber StarGem
P.S. I hugged Ian, the Myth Tree today, and ruined my Dragonspyre clothes by getting his eye salvia on them.
Posted by Al Fonzo at 8:30 PM

It's good to be back, Amber. We will most *certainly* cross paths, and soon enough! ;)

AutumnalDusk: How bout tomorrow at 4:00 Eastern, next to Dworgyn, on Wu area 1??

Light pollution isn't TOO bad here, even though it's a suburb. On good nights you can see most of the stars, and on really good nights (LOL, blackouts) you can see the universe. It's really beautiful. I was talking with my mom on a walk, and I think we should do a neighborhood "turn off your lights" thing. That would be really cool, and you could see stars! And exoplanets! And an eclipse! (We saw a partial eclipse on our front lawn before. ;-))

shoot, I guess I didn't make their in time, mind if we meet 5 eastern??


Visit Diary of a Wizard ConnectX

Wicked Books you should read!

My Awesomely Awesome List Of My Favorite People Who Blog!